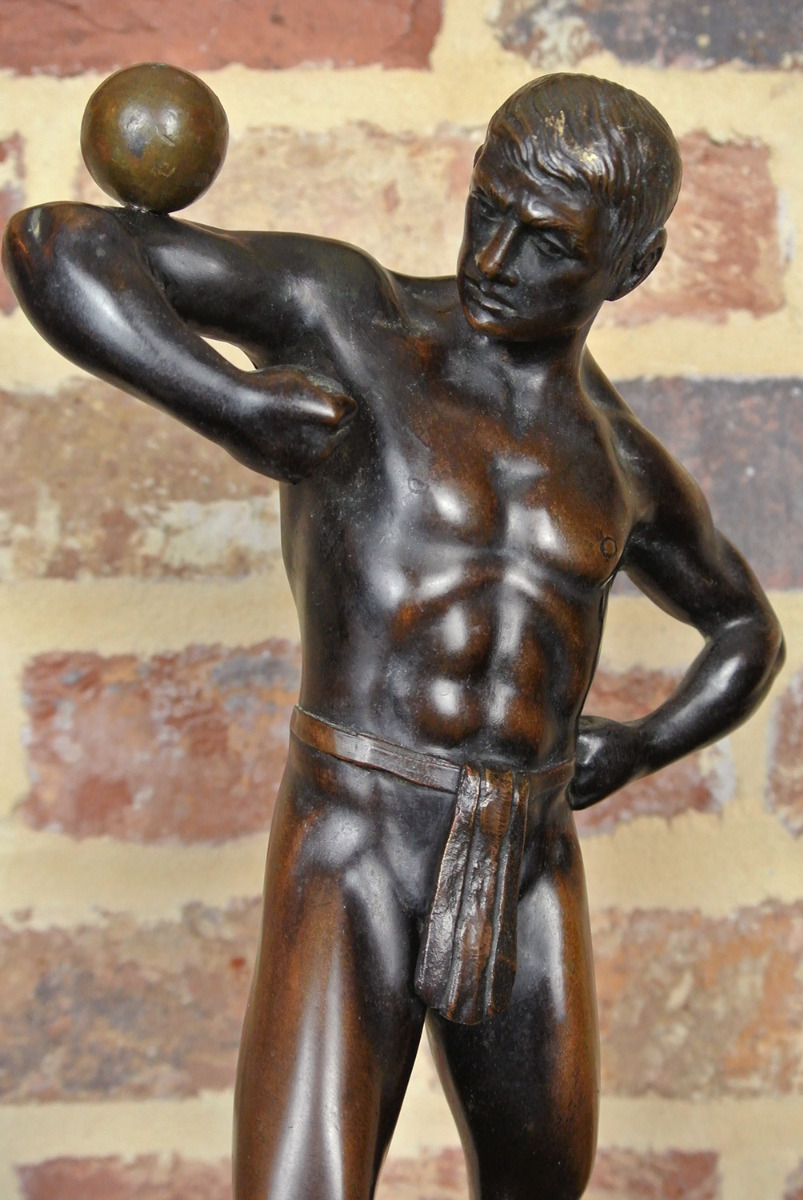 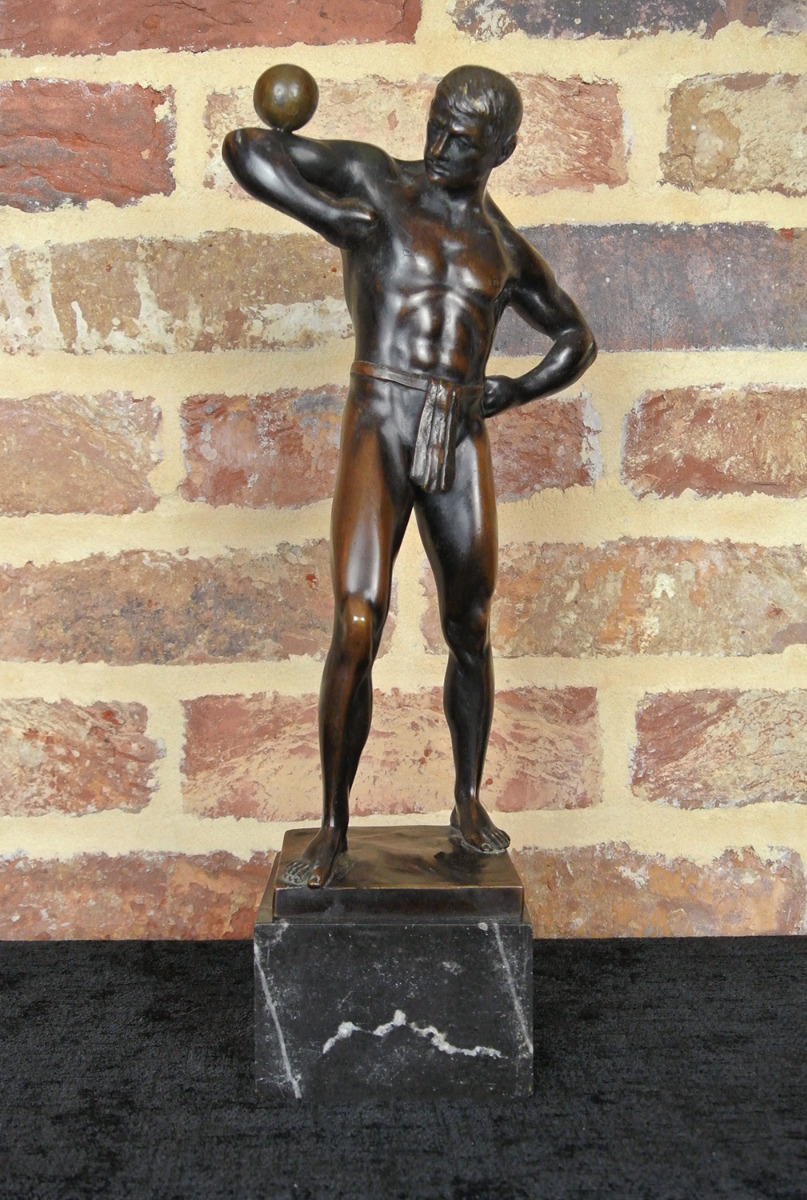 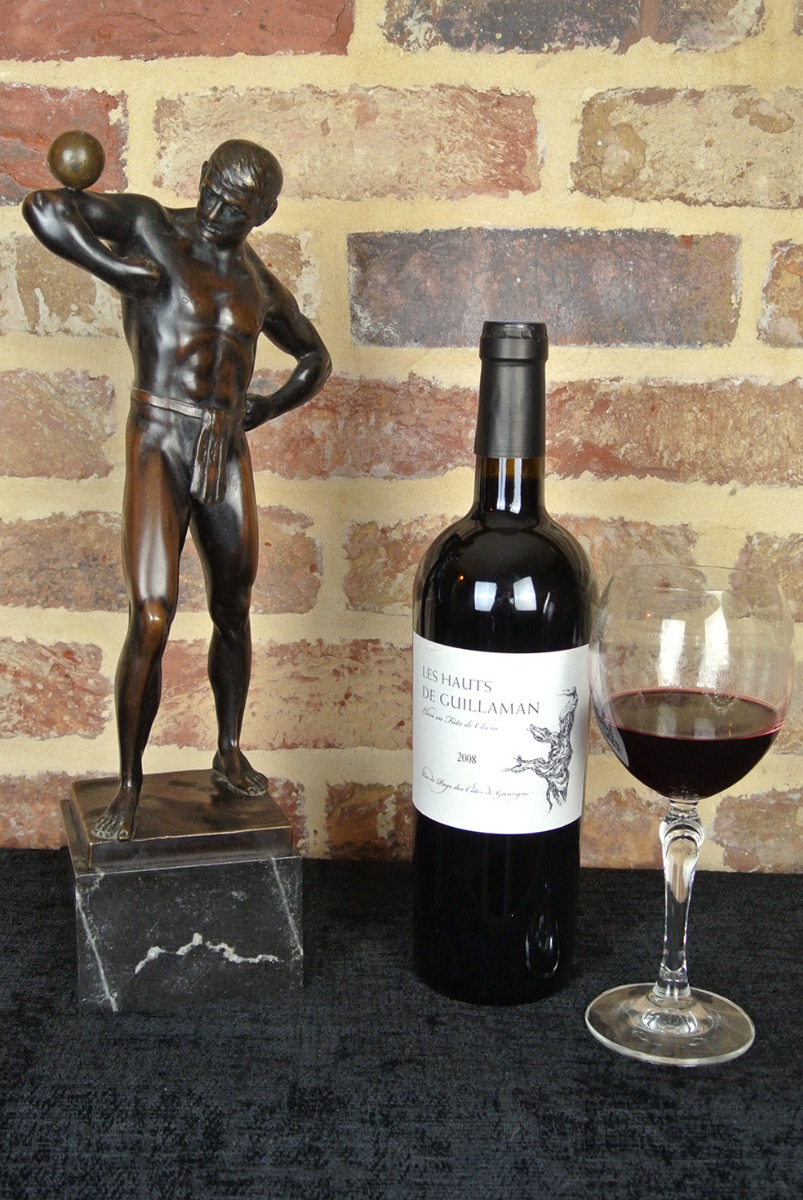 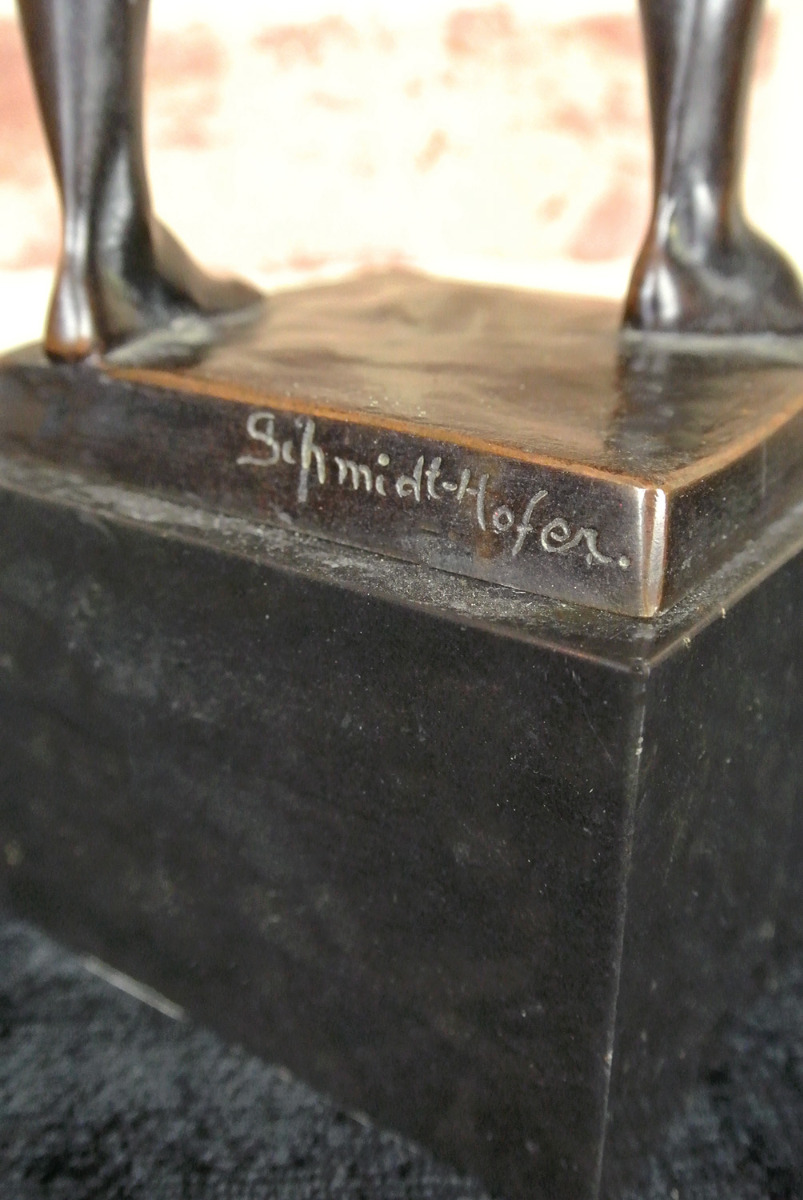 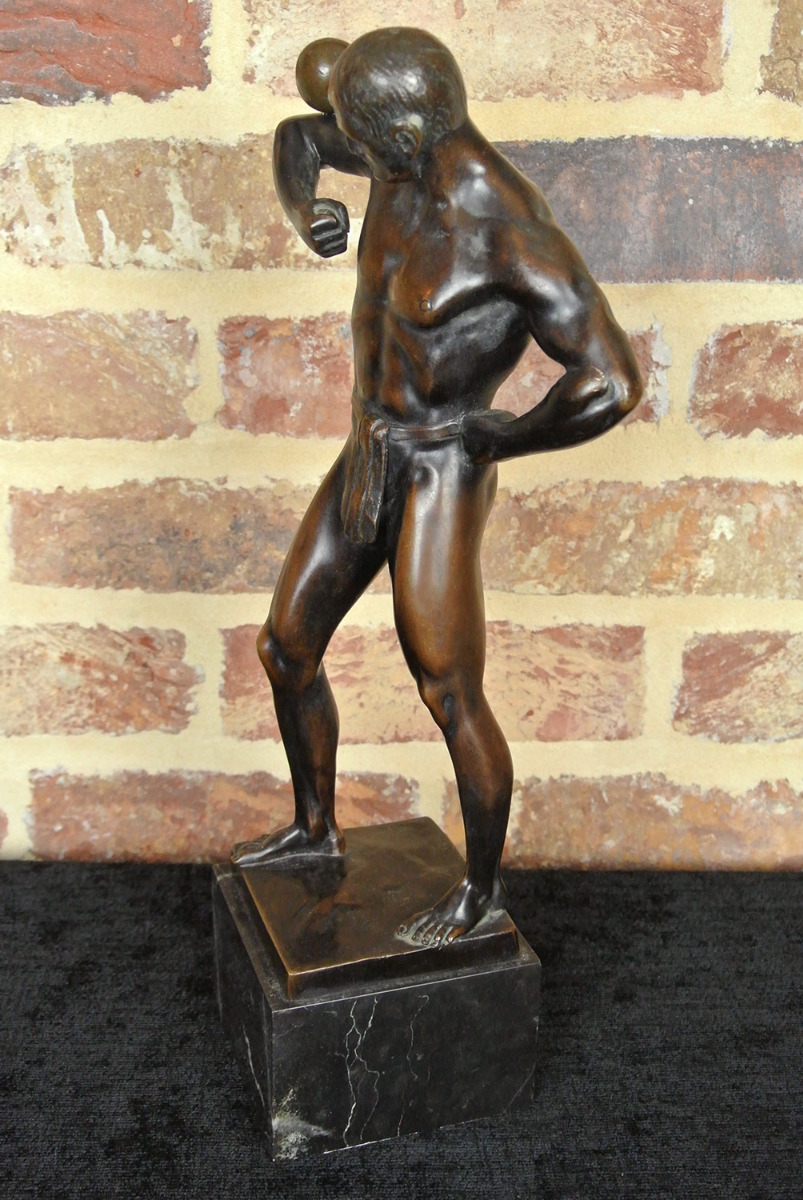 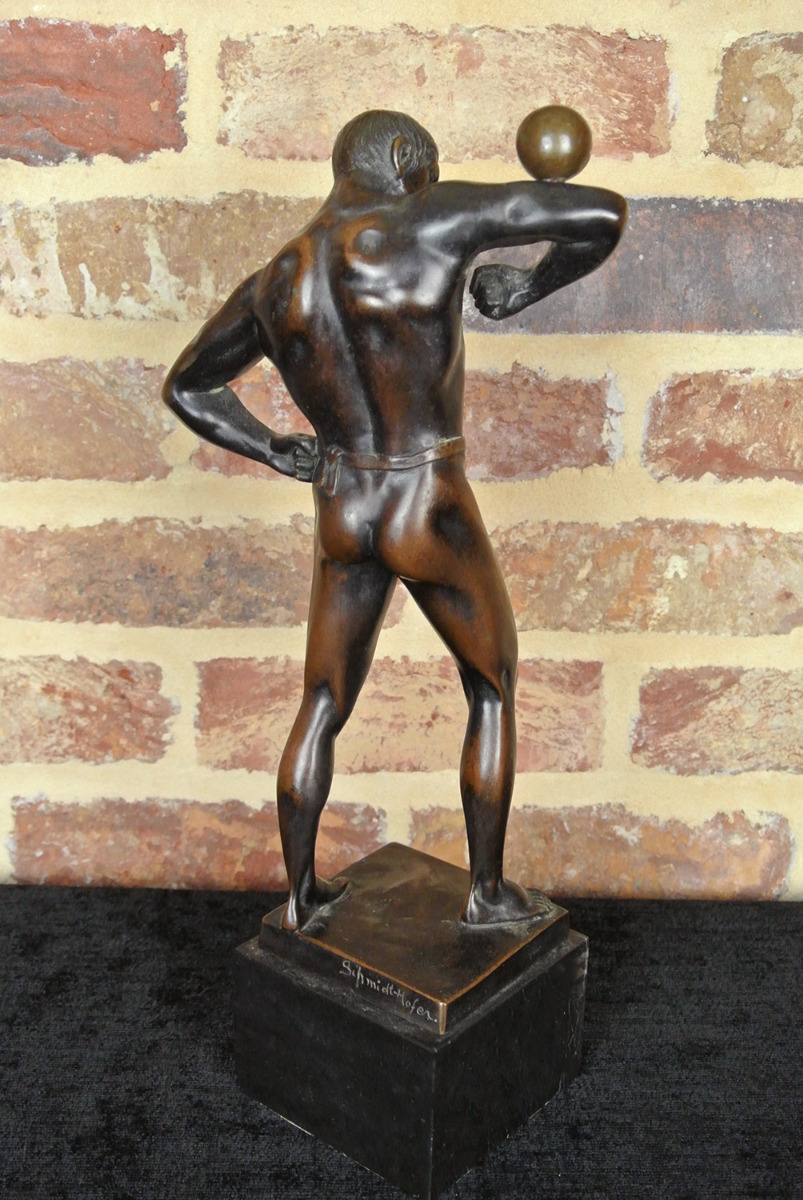 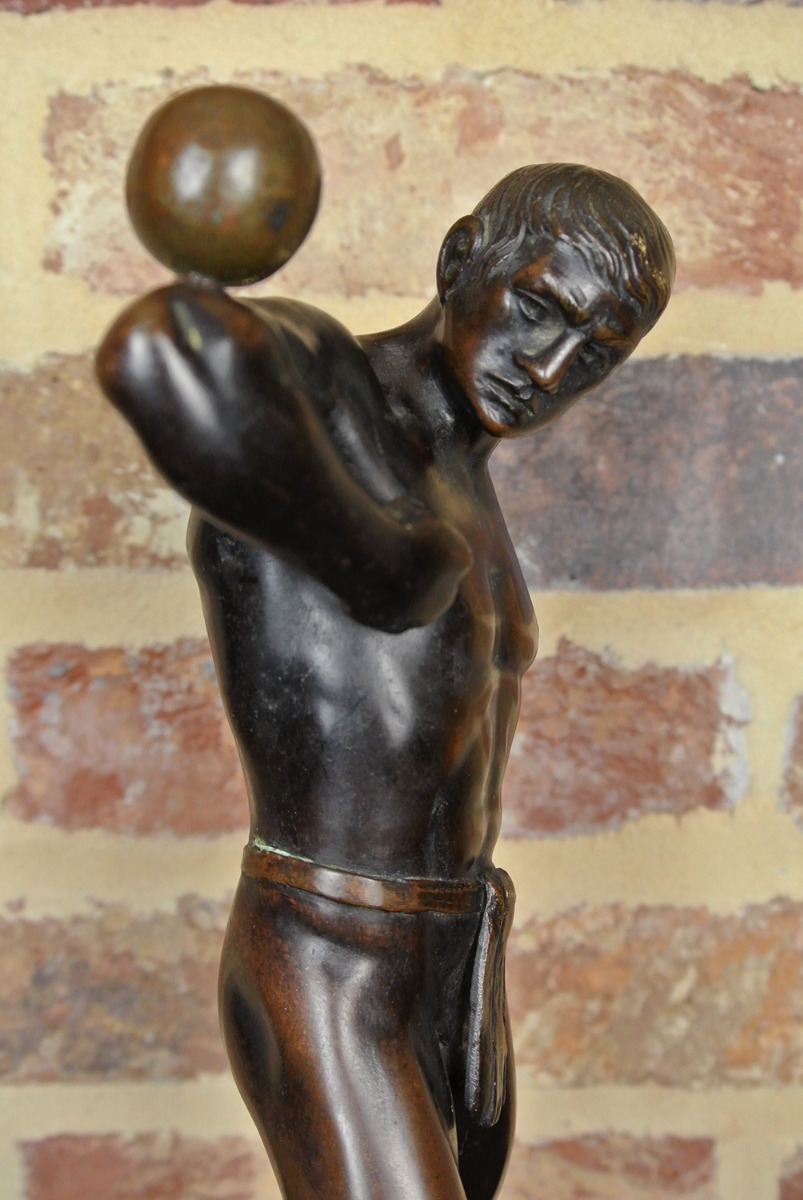 The bronze in excellent original condition with no breaks or repairs. The marble in excellent original condition also with no breaks or repairs or marks but with a tiny nibble to one upper corner and two small nibbles to the underside of the base edge - not visible except on very close inspection and consistent with age and use.

Otto Schmidt-Hofer was born in Berlin in 1873. He studied at the Royal School of Art and at the Berlin Museum of Decorative Arts. His sculptures featured people at work, carrying our everyday tasks and he produced a number of sculptures of athletes, blacksmiths, stone masons and of women harvesting fields.  His style transitioned from the Art Nouveau to the Art Deco form.

Almost every renowned gallery in Europe exhibited his work and he lived in Paris until 1914, returning to Germany at the outset of World War I. In 1921 he almost died of starvation in post-war Berlin*.

Among his contemporaries - Franz Iffland, Ferdinand Preiss and Schmidt-Felling - he is considered one of the premier Neoclassical, Art Deco and Art Nouveau Sculptors that Germany has produced.

Otto Schmidt-Hofer died in 1925 and from 1930 onwards Arno Breker developed his classical Greek/Roman style further and, like Schmidt-Hofer, often used athletes as models.

‘I am often asked why I use athletes as models and whether this is not outmoded. My answer: That which is good never becomes obsolete. Athletes are the best models for sculpture. It is impossible for a sculptor like me, who loves the triad of beauty of the body, spirit and soul, to overlook either a male or a female athlete. Besides, I have always been interested in athletic achievement per se, as well as from an artistic viewpoint’


*An extract from Rochester Democrat and Chronicle’ (New York), July 31, 1921
In this American newspaper of July 31, 1921, the American Businessman Gustave A. Sonnleitner writes about his journey through post-war Germany. He found Otto Schmidt-Hofer almost dying from starvation. He described the disastrous, catastrophic state of Germany, the chaos, revolution, the suffering populace.
Sonnleitner was a foreign purchasing agent of a company in Rochester (New York).
‘I was visiting Germany when the machine-guns of the Socialists-army were turned loose upon the crowds of half starved people..…While virtually about 80 per cent of the people residing in the industrial centers at that time were slowly starving to death … It gave one the impression that a plaque was ravaging the country. Upon reaching Berlin I began a search for a former artist friend (Otto Schmidt-Hofer) who had gained fame before the outbreak of the World war. At that time he was living in France and was a sculptor of renown, having exhibited his works in nearly every famous gallery in Europe. Shortly before the outbreak of the war he moved to Berlin and was unable to get out of the country after the conflict had started…I found the one-time famous artist lying in bed nearly dead from starvation. He had been without food for a period of three weeks. With him in the same room was another sculptor, Erich Saalmann by name. He too was in a very weakened condition due to the lack of food, but was not as yet confined to his bed. Standing about the room in various places were examples of the work of these men, which, if conditions had been anywhere normal, would have represented a small fortune for both artists. It seemed to me to be rather heartless trick of fate to surround these men with such works of beauty and genuine art and also keep them from getting even the barest necessities of life. I managed to procure a quantity of milk and eggs and gradually both artists regained sufficient strength to get about again. Out of gratitude for my services Schmidt-Hofer set to work as soon as he was able and designed what he declared to be his masterpiece. He named it ‘Dancing Goddess’. The work was of the Greek type and proved to be an exceptionally piece of art. The first bronze statue made from the original he presented to me, and finally gave me six additional copies. He then destroyed the original, thus assuring me that I possessed the only work of this type in existence’.