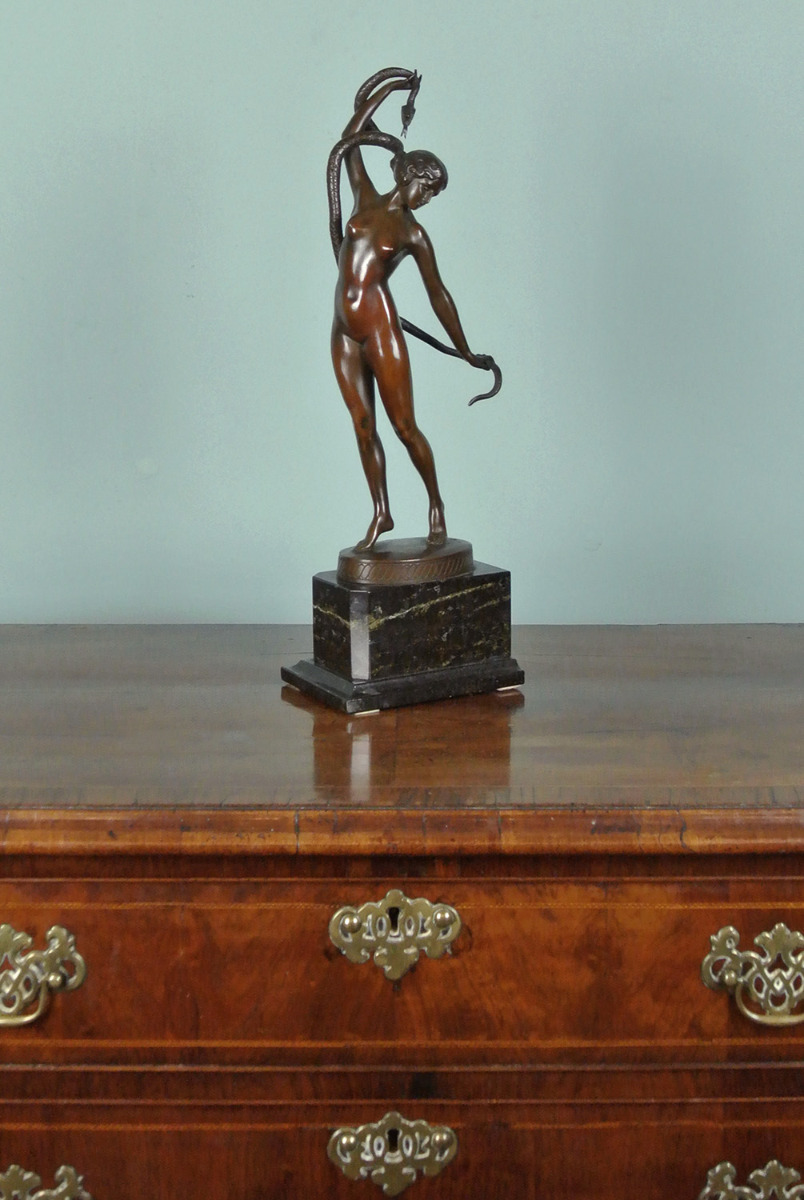 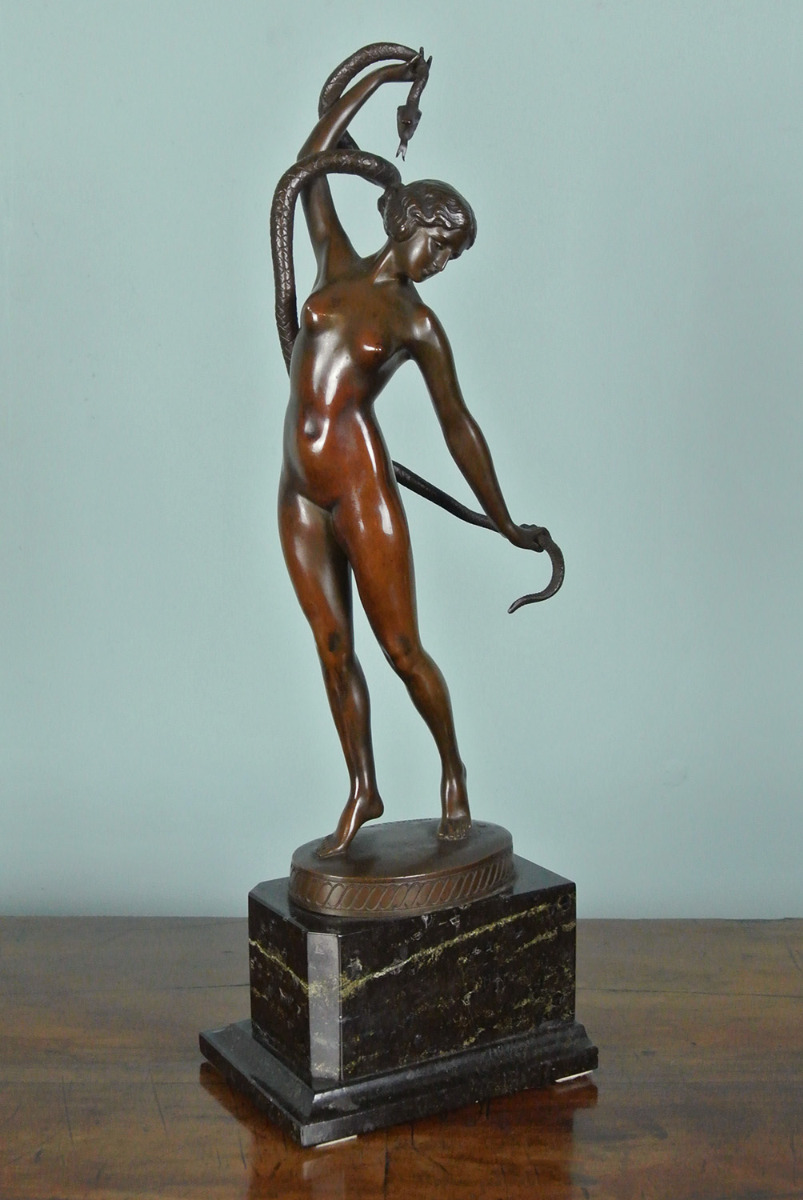 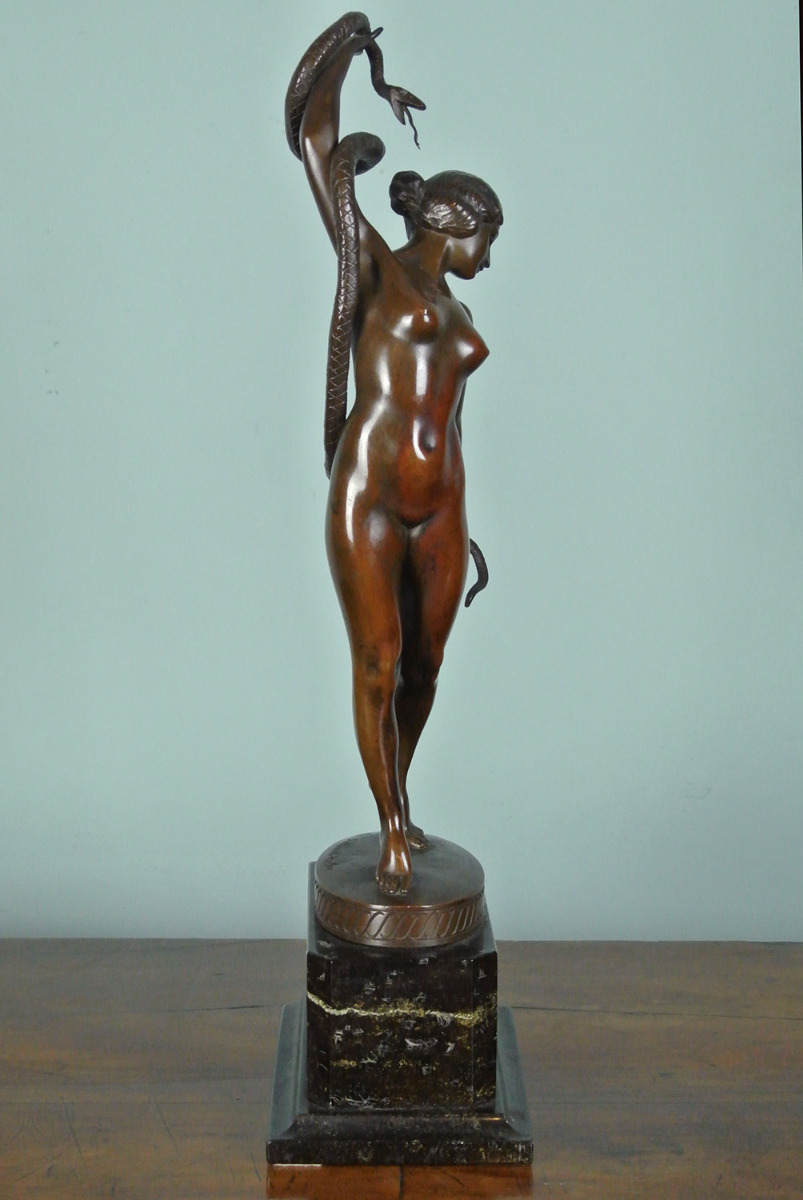 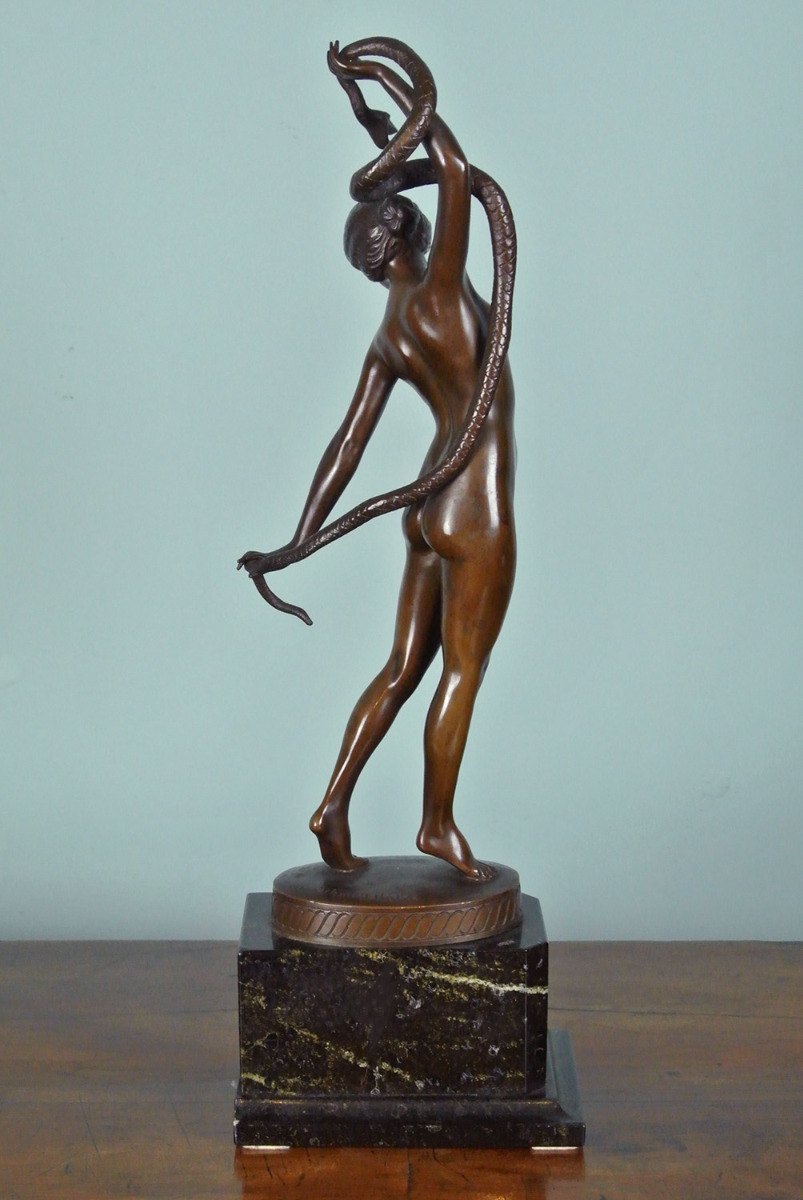 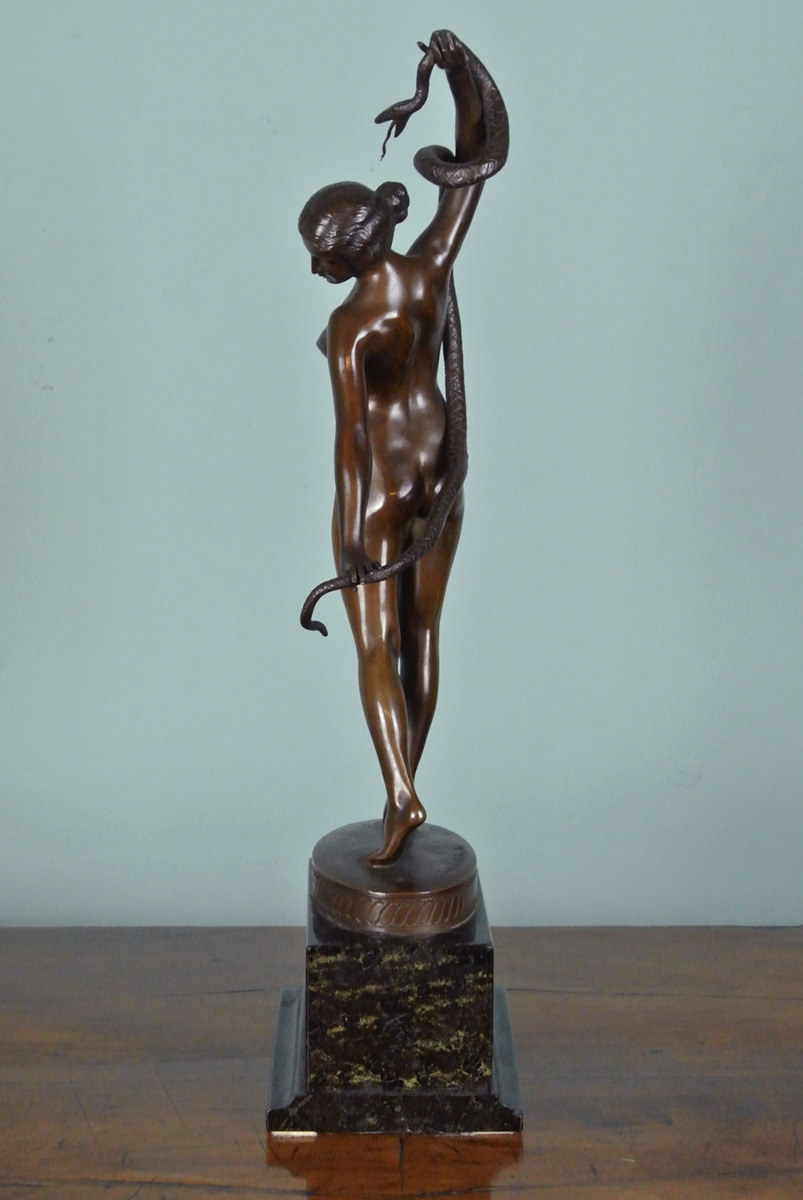 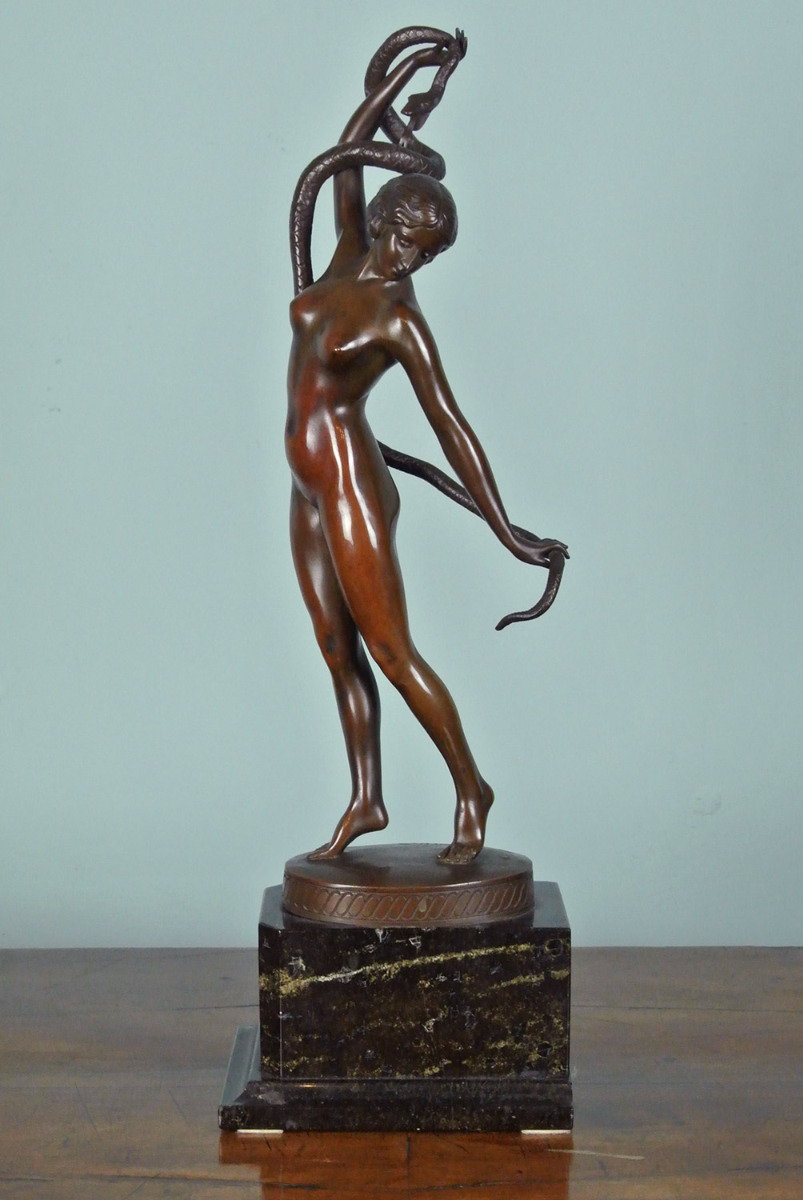 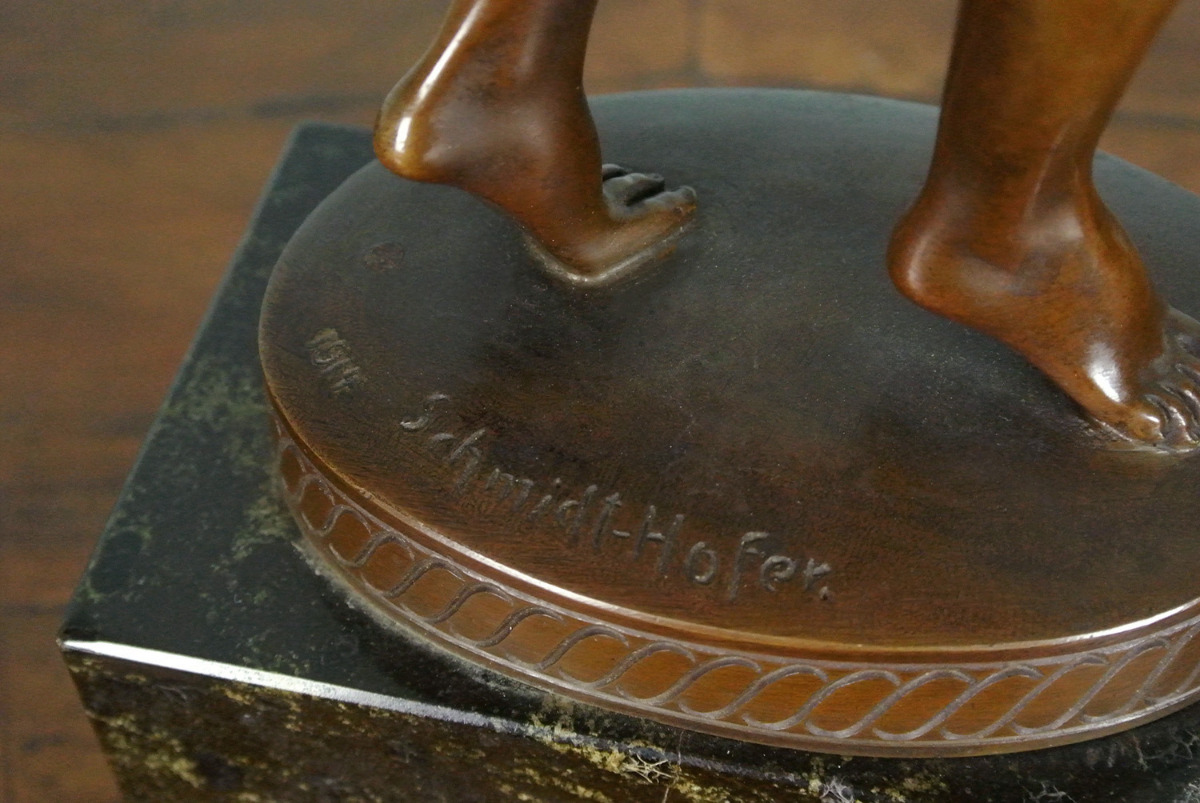 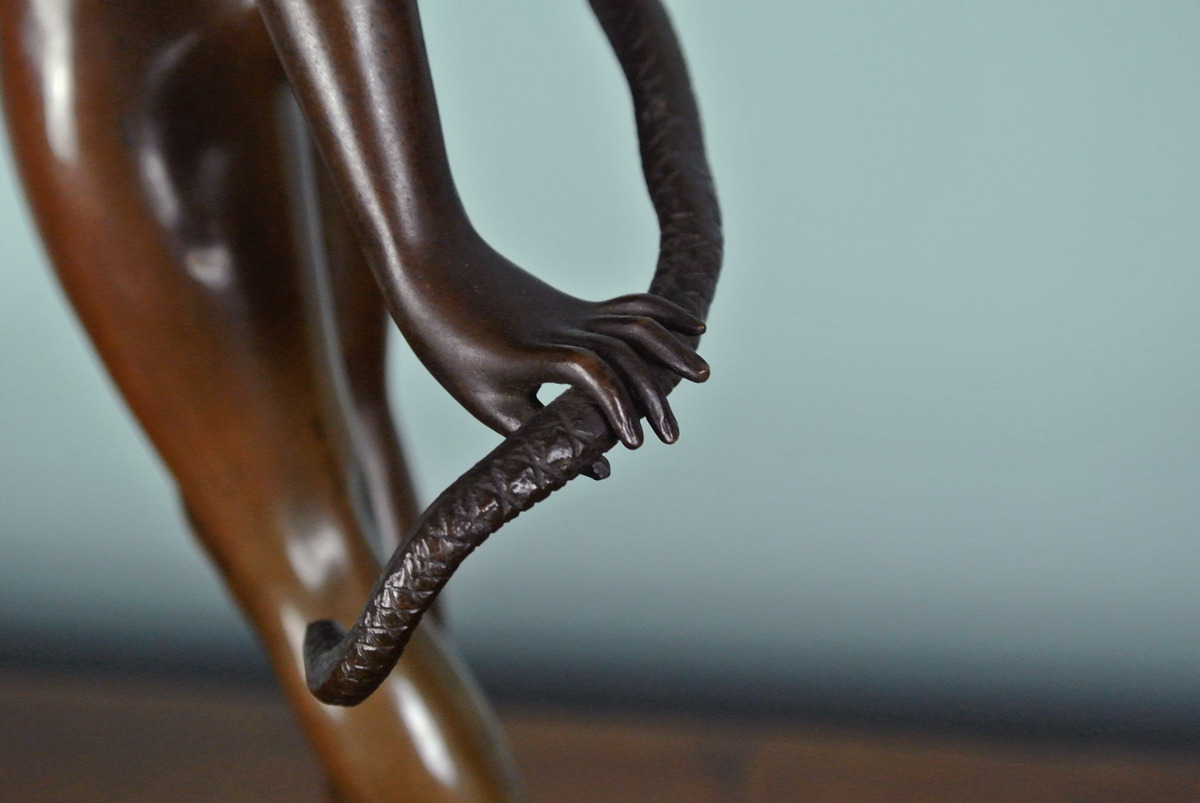 A beautiful original bronze of Eve with the serpent in the garden of Eden
Dated
1914
Dimensions
Height: 19"
Full Description
Both bronze and stepped marble base in very good condition with a warm brown patina and signed Schmidt-Hofer 1914.

Born in Athens, Greece in 1937, Nicholas Zoullas' family survived the turmoil of World War II experiencing the horrors of war firsthand. As Greece was conquered by Nazi Germany, Zoullas' father led the drive to protect Jews seeking refuge. Sadly, this humanitarian work was met with disdain exposing the family to persecution. They fled Greece.

Uncertain of their future, in 1947 the Zoullas family arrived in New York. Befriended by other Greek immigrants, the family settled down. Young Nicholas excelled, ultimately graduating from Harvard Law School. Following in the footsteps of his father, Zoullas entered the shipping industry. And through the years, financial success allowed him to immerse himself in his increasing fascination with his Greek heritage and growing passion for the world of art.

In the 1980’s, Zoullas began to collect. Dietrich von Bothmer of the Metropolitan Museum of Art and leading specialist in the field of Greek antiquities, helped Nicholas put together a substantial assemblage of ancient Greek pottery. As Nicholas matured however, his passion for nineteenth and twentieth century art blossomed into an important collection. Guided by many accomplished museum curators and gallerists, the Collection branched out in diverse and interesting ways.

A regular for decades at the world’s leading auction houses, Zoullas took a special interest in the classical female form, finding the genre under-appreciated in the late twentieth century art scene. As a result, a Collection emerged consisting of work from around the globe with paintings, drawings and sculpture by emerging artists who Nicholas Zoullas financially supported on to examples by some of the most important artists to appear in any collection.

The Zoullas collection offered in 2020 by Guernseys New York and several select examples from the Collection featured in recent Christie’s auctions.