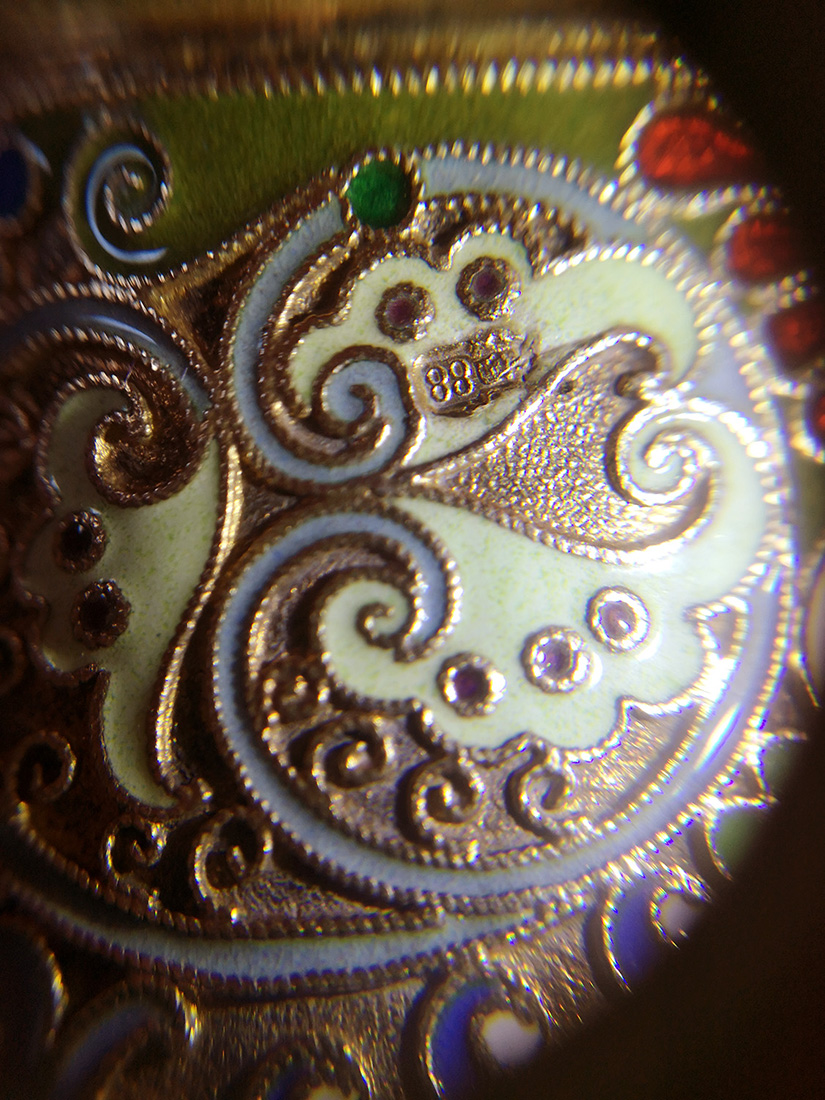 Exceptionally fine quality workmanship, the silvermark "88 zolotnik" is equal to 916 silver and a sign of higher quality, often used by top manufacturers.

Heavy at 62 grams, the bright rich and translucent enamels are typical of the Faberge pallet with ruby reds, soft white, limed and bottle greens, and royal and sky blues. The exceptionally fine silver gilt twisted cloisonne reserves throughout in excellent original condition.

The silver reserve bearing the initials DT, for Dimitri Tiomkin, one of Hollywoods most distinguished and sought after composers.

The pot with rope twist borders to base and rim was probably intended to commemorate a birth or christening and in our view dates from c. 1895 (with family names skipping each generation, it perhaps marked the baptism of an earlier D.T. in this wealthy well educated family). Condition excellent with only fine superficial surface scratches and very light wear consistent with age.

Born in the Kremenchug, Russia in 1894 Dimitri Tiomkin music studied at the St Petersburg Conservatory from 1906. Faberges workshop in St Petersburg at this time and employed numerous master silversmiths producing work for the Tsar, the court and celebrity clients. During his time in St Petersburg Topkin was very well known as he provided the piano accompaniment for famous ballerinas and for silent Russian and French films. He frequented the “Homeless Dog” café, fraternizing with other avant-garde bohemian artists, including fellow student Serge Prokofiev and dancer Mikhail Fokine.

In 1921 at the height of the Russian revolution, Dimitri moved to Germany to join his father Zinovy (a distinguished pathologist and associate of Professor Paul Ehrlich) where he regularly performed with the Berlin Philharmonic Orchestra and in 1925 he was offered work in New York. In 1972 Tiomkin married Olivia Cynthia Patch, a British aristocrat, and the couple settled in London. They also maintained a second home in Paris. For the rest of his life Tiomkin indulged himself in playing piano, a joy also shared by his wife. He died on November 11, 1979, in London, England. The pot has then been passed through the family.

Dimitri Tiomkins scores featured in more than 100 films including High Noon, The Alamo, Its a Wonderful Life and Dial M for Murder and he wrote repeatedly for directors such as Howard Hawks, Alfred Hitchcock and Frank Capra. He worked in all genres and also wrote for television. He won numerous international awards and American honours along with four Oscars and he was nominated 16 times for Academy Awards.

The proof of provenance will accompany the pot.